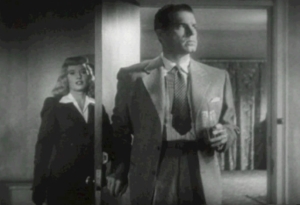 In this final post of this 3-part series on film noir, I would now like to list ten of the best examples of real film noir and why, based on my last post discussing 5 key defining factors of true noir. I would like to add that, in my opinion, these are the ten best noirs ever made. That last statement is entirely subjective as you know, but I’m sure many who know movies from the classic period and noir in particular would not disagree with most of these choices. But if you disagree with them, don’t fret-after that list is a list of 10 honorable mentions which are almost as good as the first group and are good movies on their own, but may lack one or two qualities of the first ten that bear the unmistakable stamp of noir. Here then, for any who want to know what it would be, are ten examples of true film noir in descending order:

(1) Out of the Past (1947) The best example of true film noir you can find. It has every factor discussed in spades, plus a convoluted plot, which sometimes is more prevalent in noirs than other types of films-but who cares? For anyone who wants to see what noir looks like, sounds like, and feels like, there’s no better starting place than this one. The true gold standard.

(2) Double Indemnity (1944) The second best example. Barbara Stanwyck’s portrayal of a femme fatale is up there with some of her best performances and that’s saying something. This one also has everything a real noir should have, along with direction from one of the best writer-directors of the classic period and of all time, Billy Wilder. Can’t get much better than that.

(3) Murder, My Sweet (1944) This adaptation of a Raymond Chandler novel starring former song and dance man Dick Powell as private eye Philip Marlowe is a knockout film noir and another sterling example of this type of film. It has all the elements and is almost a perfect (some would say stereotypical) example of what many would consider a film noir to look like and be.

(4) The Maltese Falcon (1941) Director John Huston’s first film, the granddaddy of all true film noirs. It has all the elements in place along with a legendary status, making it one of the more frequently seen film noirs. A little on the talky side, it nonetheless hits the mark based on a solid script and Bogart’s archetypal portrayal of Sam Spade, a truly defined antihero and his best noir performance.

(5) The Big Sleep (1946) Bogart’s second best noir performance, this time with his take on private eye Philip Marlowe. The plot is so convoluted it’s almost comical, but director Howard Hawks keeps things moving at a lively pace and the look and feel of noir is clearly in evidence, making for solid entertainment.

(6) The Postman Always Rings Twice (1946) Great performances by John Garfield and Lana Turner, with her turn as a legendary femme fatale, make this one of the classic examples of true film noir. Though having less of an urban setting, it still hits the mark in exemplifying the doomed protagonist and ‘woman of prey’ scenario to the hilt and set a model for later, paler imitations.

(7) The Killers (1946) Robert Siodmak was known as a great director of film noirs and this is the best example. From the opening scenes which are textbook examples of classic black and white imagery, the noirish tone is set and held all the way to the end. Another model of the noir look and feel, along with solid performances from Ava Gardner and Burt Lancaster in his film debut.

(8) Detour (1945) Perhaps lesser known by the general public but well-known by noir aficionados, this is noir at its pulpy best. You will not get a better example of an over-the-top femme fatale than that of the appropriately named Ann Savage. Though made on the cheap, it lives up to what a true noir is and should be and is truly hard to forget.

(9) Raw Deal (1948) Lesser-known than other noirs of the time and a little less highly regarded, it is a solid and worthy entry in the true noir canon. It has all the elements with a twist-the voice-over narration is not by the protagonist, but by the leading lady of the movie, the always excellent Claire Trevor, a personal favorite. With Raymond Burr as a memorable heavy, it’s a gritty, hard-boiled noir gem, with striking cinematography by one of the best to ever sit behind a camera, John Alton, and one of the best unsung directors of noir, Anthony Mann. Raw Deal is the real deal.

(10) The Big Combo (1955) Though not having as clearly defined a femme fatale as most of the other examples, it makes up for this in having some of the most breathtaking noir imagery ever put on screen courtesy once again of John Alton. A great example of what noir looks like as well as having the true noir feel, it is an excellent example of what a noir should be and is worthy of a look for all who want to see it in all its black and white glory.

These would be the best ten examples of what to see if you’re looking for a true film noir. You will certainly not go wrong, nor will you not clearly see the earmarks of a real noir in evidence. However, to make sure that any worthy examples are not missed, I’ll now provide ten other titles that, in my opinion, fall just a little short of the ten mentioned based on missing one or two or more of the factors cited in the last post but are great films to see nonetheless. They will all give you, to a certain degree, either the look or feel of real noir, though not as strongly as the first ten. They are, once again in descending order:

Hopefully this post, along with the other two, proves helpful to anyone looking for a bonafide film noir. Though some titles may be missing that a noir enthusiast feels should be here, it is not because they are not good movies, nor is it because they are not necessarily noir. These are just the best examples for anyone who wants to know what a basic noir would be with all the elements in place that would make it so. Without these guidelines it may be hard to tell the difference between one and any other type of film from the classic era that may be labeled ‘noir’ but doesn’t give the true essence of one. So please keep that in mind and keep this list in mind when on the lookout for this type of movie, and then get to see, hear, and feel real noir at its best to savor and enjoy.

An avid collector of classic movies for over 20 years ranging from the silent era through the early 1960's, from the justly famous to the unjustly obscure and quite a bit in between.
View all posts by bjbradford →
This entry was posted in classic movies, Uncategorized and tagged 1940's cinema, 1950's cinema, claire trevor, classic cinema, film noir, old movies. Bookmark the permalink.