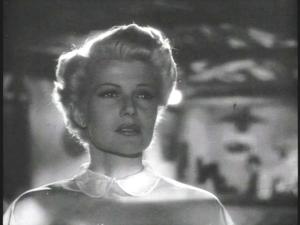 With this post I continue to list the 100 best movies made between 1946-1960. Part 1 covered Sleepers, that is, 15 great movies of that period that are not completely unknown but may be lesser known by even quite a few current movie fans but certainly need to be seen. This group of 15 covers what I call The Other Great Ones. These would be other great works from famous directors of those years in addition to something else that may be better known, or a stand-alone great work from a lesser-known director during those years. I’ll mention which is which as I go along. Here they are, in random order:

(1) The Caine Mutiny (1954-Van Johnson, pictured above) Director Edward Dmytryk made some good movies in his time, but this would be considered his most well-known film and a classic of that period, so in that sense it is a stand-alone. A tension-filled character study and courtroom drama at the same time, it benefits from a stellar cast and great performances, particularly Humphrey Bogart as the quintessential mad military officer, Captain Queeg, along with individual scenes of striking power. Definitely one to see.

(2) Odd Man Out (1947) Director Carol Reed’s other great movie of the period, along with one to be named in a later post. Another outstanding performance by James Mason as a wounded IRA gunman after a botched robbery attempt trying to find his way to safety. Beautifully shot and superbly crafted, with an outstanding finale, it is one of the best British films ever made.

(3) In A Lonely Place (1950) Another great film directed by Nicholas Ray, one of the greatest directors of that era, with his most well-known film of the ’50’s to appear in a later post. Humphrey Bogart again, in what many consider to be his best screen performance, stars along with a personal favorite of mine, Gloria Grahame, in a powerful character study of a screenwriter with a violent temper possibly guilty of murder, the woman who loves him, and the destructive relationship this leads to. This movie gave birth to what some consider the most romantic words said in any movie: “I was born when you met me, I died when you left me, I lived a few weeks while you loved me.”

(4) Pather Panchali (1955) The movie that put films from India on the map and showcased the extraordinary talent of director Satyajit Ray in his feature film debut. A remarkable, brutally realistic, and tragic story of a poor Indian family, it showcased a part of the world that had not been seen by many before and introduced to the world the greatest director to come out of India and one of the greatest directors period. Though he went on to make other great films, this film, along with the two that followed it in the ’50’s, formed a trilogy that is arguably the greatest film trilogy ever made to this day.

(5) Ace in the Hole (1951) Billy Wilder’s probably least known great film of the 1950’s. An incisive, compelling melodrama that rings true even today, it tells the story of a self-seeking journalist, played to the hilt by Kirk Douglas, who strives to boost newspaper sales and his own image by delaying the rescue of a man trapped in a mine. An unrelentingly cynical look at journalism, it truly lives up to its other title in showing the power of the press gone awry: “The Big Carnival.”

(6) The Lady From Shanghai (1948) (Rita Hayworth, pictured above) Orson Welles’ other great film of the period. Though the story may lean toward the convoluted side (the movie possibly cut against Welles’ wishes), the visuals are pure black and white poetry, with a climax in a hall of mirrors that is stunning in its virtuosity. One of the most brilliantly shot movies of that or any time.

(7) Rififi (1955) Director Jules Dassin made some good films during the era, such as Brute Force and Night and the City, but this one stands head and shoulders above them all, so in that sense it is a stand-alone. The template for all heist movies gone wrong to follow, it tells the tale of a group of crooks who rob a jewelry store and what happens to each one afterward. There is a 25 minute silent robbery sequence of the jewelry store itself that is amazing even to this day. A must-see for any true cinephile.

(8) Johnny Guitar (1954) Nicholas Ray again, this time with Joan Crawford in tow, in one of the most bizarre and entertaining Westerns ever made. Almost an extended catfight, with Mercedes McCambridge as a frighteningly intense antagonist, it tells the story of a gambling saloon owner played by Crawford who resists the efforts of McCambridge and others to run her out of town or have her killed. Great dialogue, unusual settings, glorious Technicolor, and the strong presence of Joan Crawford add up to a cult classic that should not be missed.

(9) Winchester ’73 (1950) Director Anthony Mann’s best western of the 1950’s, and he made some good ones. An exceptional, very entertaining Western, with James Stewart as a man tracking his stolen rifle and the trail of hands his rifle travels through, leading to a memorable shootout climax. James Stewart in great anti-hero mode, Dan Duryea as a great slimy villain, and a compelling storyline all make for another must-see movie of the time.

(10) Marty (1955) Another stand-alone, with Ernest Borgnine in a poignant, Oscar-winning performance as a lonely Bronx butcher who finds love with an equally lonely girl. One of the best of the filmed teleplays of the era, its naturalistic setting and dialogue set a path for other films to follow and its impact remains to this day.

(11) The Bad and the Beautiful (1952) (Lana Turner, pictured above)) Director Vincente Minnelli’s other great movie of the 1950’s, with another to be mentioned in a later post (though Some Came Running comes close). A clever, incisive look at Hollywood and its machinations that is not dated down till today, with an excellent performance in particular by Lana Turner, it makes for great entertainment.

(12) Sweet Smell Of Success (1957) Years ago, New York magazine boldly proclaimed that this was the best New York movie ever made, and its doubtful even a dyed in the wool New York filmmaker such as Woody Allen would disagree. This would be a stand-alone since the director, Alexander Mackendrick, save for the excellent Ealing Studios comedies The Man In The White Suit from 1951 and The Ladykillers from 1955, has done work that is not known by most. But this one more than makes up for that. One of the best written movies ever made and brilliantly filmed in gleaming black and white by the great James Wong Howe, the movie vividly captures not just NYC nightlife of the 1950’s, but practically seethes with the barely contained ruthlessness of Burt Lancaster, in a chilling performance as JJ Hunsecker, the most feared columnist in New York, and his contempt for fawning press agent Sidney Falco, played by Tony Curtis in what his probably his best ever performance. A definite must-see on many levels.

(13) Diabolique (1955) Much imitated, even remade (sadly), but never bettered. A highly influential, suspenseful, and downright scary thriller from lesser-known French director Henri-Georges Clouzot, who specialized in suspense, it is about a sadistic headmaster’s wife and mistress who conspire to kill him and do, but then his body disappears. The story goes that Alfred Hitchcock wanted to direct this but couldn’t get the project. It is a testimony to the quality of this movie that even he couldn’t have done it better.

(14) My Darling Clementine (1946) Director John Ford and the second best western he made during that period, with the first to be named in a later post. The story of Wyatt Earp, played by Henry Fonda, and Doc Holliday, played by Victor Mature, cleaning up Tombstone, including the shootout at the OK Corral, this is a beautifully shot movie, with memorable scenes and excellent performances, a true classic of its type that should not be missed.

(15) Bad Day at Black Rock (1955) John Sturges, though not a household name, was a solid action director if there ever was one, and this is testified to both by this film and another one that is extremely well-known to be named in a later post. This story of a one-armed stranger, superbly played by Spencer Tracy, getting off a train in a sleepy desert town filled with hostile townsfolk and something very sinister to hide, is powerfully told with electrifying action sequences and strongly drawn characters played by some of the best character actors in the business. Another must-see of the period and essential viewing.

This would constitute the group of The Other Great Ones, added to the 15 from my last post, all without question some of the best movies ever made. My next post will add more to the total and the group will have this title: The Next Level. Tell you more when I see you then.

An avid collector of classic movies for over 20 years ranging from the silent era through the early 1960's, from the justly famous to the unjustly obscure and quite a bit in between.
View all posts by bjbradford →
This entry was posted in classic movies and tagged classic cinema, film noir, george clooney, martin scorsese, old movies. Bookmark the permalink.